I just finished reading “Jacob’s Dozen: A Prophetic Look at the Tribes of Israel” by William Varner and found it to be a great and enjoyable read. Varner takes the blessing that Israel gave to each of his sons from his death bed and then complies with it their history. This gives the reader an in-depth look at what became of each of their tribes. Most books that deal with this information often spend most of the pages laying out and explaining the end times. Not so here, most of the book is dedicated to the history of each tribe, with the author using one single chapter to simply explain his belief of the tribes place in end times prophecies. At just over a 100 pages, this is a quick afternoon read.
One of the more interesting thoughts that Varner points out in his writing concerns the first born son, Reuben. Reuben’s blessing was not one of the typical first born because of an ‘indiscretion’ he had with his father’s concubine (Genesis 49:3-4). His action caused his first born rights to be passed onto his brother Joseph (I Chronicles 5:1). In this blessing his father also prophesied that he was “Unstable as water, thou shalt not excel…” (Genesis 49:4 KJV). His tribe went on to fulfill this prophesy by their lackluster lives.
The most blatant example of this is found in the song of Deborah in Judges Chapter 5. Ruben’s tribe is mentioned in verses 15 and 16; “The leaders of Issachar came with Deborah; yes, Issachar came and Barak too, and they followed him into the valley. But the tribe of Reuben was divided; they could not decide to come. Why did they stay behind with the sheep? To listen to shepherds calling the flocks? Yes, the tribe of Reuben was divided; they could not decide to come.” (Judges 5:15-16 GNB)
Each of the tribes was expected to send troops to assist in taking possession of Canaan. This meant the overthrow of Sihon, Og, and the Midianites. Ah, but the tribe of Reuben just never got around to deciding to send their support. Deborah mocks them in her song and accuses them of staying home to listen to their sheep bleat. What a great illustration for us today! Do we heed the Holy Spirit’s guidance or do we find other things to do?
Are you listening to God’s directions for your life or are spending your time ‘preparing’ to step out but just never quite taking the steps? Are you willing to stand in the gap for God or will you stay home and listen to the sheep bleat. 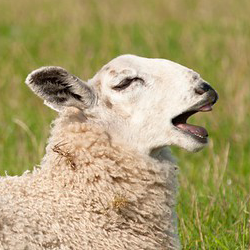