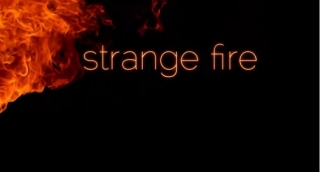 My sister taught Sabbath School for years and the one thing that always weighed on her mind and that she prayed constantly about was that she would speak God’s word truthfully and in accordance with His will. She never wanted to cause one of her students to stumble or question their faith because of misspoken words.
“And Nadab and Abihu, the sons of Aaron, took either of them his censer, and put fire therein, and put incense thereon, and offered strange fire before the LORD, which he commanded them not. And there went out fire from the LORD, and devoured them, and they died before the LORD.” (Leviticus 10:1-2 KJV)

Here in Leviticus we find the Israelites in the wilderness after just completing the Tabernacle and having just finished the consecration of it and of the Priests. Nadab and Abihu, decided that the greatness of God was so overwhelming that they would add to the ceremony by offering ‘Strange Fire’ before the Lord.
Their actions led to an immediate punishment, one that brought on their death.
Commentators have speculated about the circumstances that bought on their untimely death. Some of these include:
One thing is certain they offered “fire which the Lord had not commanded them”. And this sin brought them certain and instant judgment.
It is totally possible that they meant no harm by their actions. But as the Expositor’s Bible points out, “For the essence of their sin was this, that it was will worship; worship in which they consulted not the revealed will of God regarding the way in which He would be served, but their own fancies and inclinations.”
Years later King Saul found the same type of issue when he tried to offer sacrifices to cover up his disobedience. Samuel pointed out the error of his ways in that it was better to obey than to sacrifice.
“And Samuel said, Hath the LORD as great delight in burnt offerings and sacrifices, as in obeying the voice of the LORD? Behold, to obey is better than sacrifice, and to hearken than the fat of rams.” (1 Samuel 15:22 KJV)

Why did God deal with them such?
The Congregation as a whole witnessed this. The Priests and their act of presenting something ‘strange’ and out of the instructed process of worship could have had harmful consequences down the road.
We must be like my Sister and always seek God’s will in our worship. We should never stand before a group and not speak and act according to and pleasing to His will.