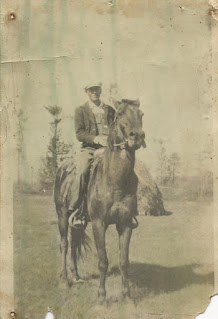 This is my favorite picture of my Dad. I am guessing it was made in the late 1920’s. Dad was a good man, full of humor; he provided for his family and helped others in need. It wasn’t until after his death that we heard rumors of his “sorted” past. While none of the items mentioned where horrible or devastating, it did reveal a part of him none of us ever knew.

He and his step-father did not get along and so when he was 13, he left home and “ran the roads”. During this time he lived with family and friends and sometimes just slept in someone’s barn. What we didn’t know was that his nickname was “Punk” and that he carried a short barrel 38 revolver. Sis and I would talk and wish we had a way to just check the local law enforcements records back then to see what things he got into. I have checked the Missouri Penitentiary records and know that luckily he never made it there! So maybe it was only mischief he got into? I’d like to believe that.

Some things about Dad that I knew and maybe lend some credit to achieving that nick name include:

When I was seven he was diagnosed with prostate cancer. While he was in the hospital recuperating, he stopped drinking, smoking, cussing and gambling. After coming home he became more active in church